FMC-CMF; the assaults on Quebec women and girls of Muslim origins are an ongoing tragedy 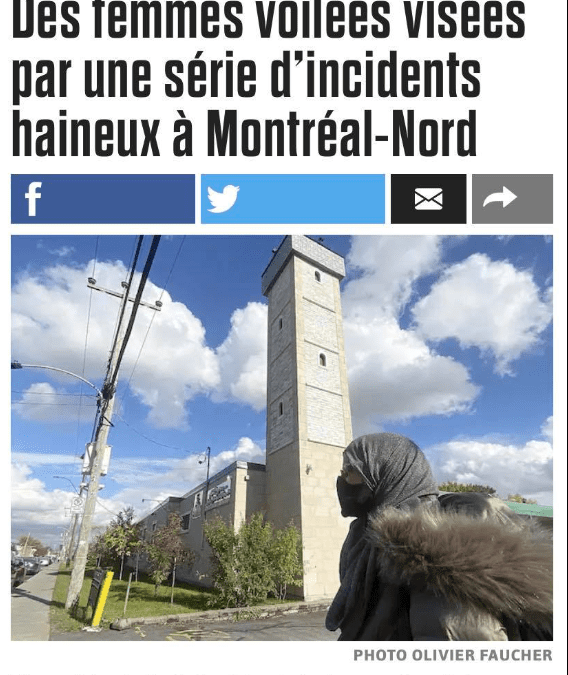 Canadian Muslim Forum/Forum Musulman Canadien; the assaults on Quebec women and girls of Muslim origins are an ongoing tragedy!

Following a media interview by the “borough-mayor” of Montreal-Nord, Mrs. Christine Black , with Le Journal de Montréal , about hate aggressions against Muslim women in the Arrondissement de Montréal-Nord, North-Montreal region, that occurred recently, FMC-CMF indicated that such Islamophobic incidents are a tragic series that are continuously going on, but, not necessarily under the light at all times.

FMC-CMF added that it has warned, as many others, that the adaptation of laws and directives which implications “legitimize” discrimination and targeting of women and various communities in Quebec, in addition to the “arrogant political language” used by prominent politicians and the state of chaos in social media platforms; All in all creates a “dangerous” atmosphere that encourages and gives the impression that racial discrimination and hate speech are acceptable without any real consequences.

The FMC-CMF renews the cautioning that the authorities’ failure to deal seriously with aggression on girls and women in public and at work places shall have very negative consequences on society in general, its safety, cohesion and fabric.

The FMC-CMF calls on everyone who is subjected to hate speech and aggressions not to hesitate to contact the police in their regional area. It is also possible to communicate with the FMC-CMF via the email; [email protected]
-30-

The link to Mrs. Black interview